In Chapter 8, Trace and his group reach Wreathwood during the 171st annual Festive of the Beasts. After entering the city, the group would meet Eric Vaughan who hosted them for the night.

In Chapter 9, Eric agrees to help Trace's group cross the sea to the Basidian Islands after being convinced by Kathrin Vaughan. The group all board the Na'Rella and leave Wreathwood. 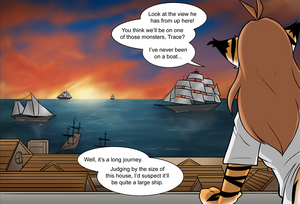 Eric's house is rather large from what can be seen, having with atleast: four[1] stories, three separate bedrooms, and two bathing rooms. From what be seen, Eric's house overlooks the docks.

Retrieved from "https://twokinds.fandom.com/wiki/Wreathwood?oldid=9317"
Community content is available under CC-BY-SA unless otherwise noted.