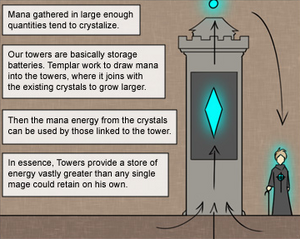 Templar Towers or Templar Barracks are large towers that served the Templar in multiple capacities. 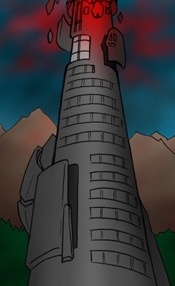 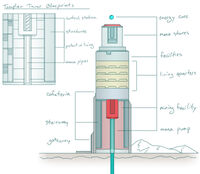 Templar Towers were well designed structures that were very resilient against external bombardment. The reason for this is that in addition to thick exterior armor, the mana crystals building up in the mana stores would solidify until they were nearly impenetrable. Protecting the interior and core of the tower.

The lower portion of towers, sometimes built entirely underground, would house a Mana Mine that would draw Mana from the surrounding land and prepare it for storage.

With the exception of The Basidian Tower, Templar Towers doubled as housing for the Templars that operated and monitored the Mana Mine and Core, as well as Templar serving as a protective and policing force in the region. The residential section of the tower contained the basic amenities needed, such as a cafeteria in the lowermost levels and facilities, the uppermost.

The uppermost levels of the towers contained The Mana Stores, the Core, and a Control Center. Mana was drawn from the earth and processed in the Mana Mine before being piped up to the Storehouses. In some towers, this Mana directly protected a large, concentrated Mana Crystal aptly named the Core. Because Mana is so powerful, it's flow into the stores and Core needed to be regulated constantly, which occurred in the control room.

The towers primary function was as a ready source of Mana for nearby Templar, who would otherwise have to draw Mana from the earth. As such, they were placed strategically so that if needed, the Templar could more easily engage in combat with the Keidran, who could only draw Mana from crystals being carried on their person, with the only known exception being Euchre. Their well fortified and, due to their secondary function as a residential facility, well defended

If too much Mana is drawn in a given moment, it may destabilize the Core and result in the tower's collapse. As the amount of energy stored within a tower is immense. Eric, expected half of the Basitin castle to be demolished when they destroyed the tower, and the blast additionally resulted in a blinding beam of light projecting from where said tower once stood. Another side effect of such a catastrophic failure is that the beam of energy from the disintegrating mine draws on all Mana sources, which dispels nearby enchantments, causes harm to magical creatures which as dragons, and disturbing natural processes such as death. As the Basidian Tower was incomplete, and had yet to be entirely enclosed, which would have increased the concentration of Mana in it's stores, the explosion could have been many times worse. As such, if a matured tower is infiltrated and detonated, or such is done in a slash and burn technique, the resulting blast would could result in the complete destruction of any town or city in it's immediate vicinity, ironically validating the Keidran concerns that the towers are weapons.

Retrieved from "https://twokinds.fandom.com/wiki/Templar_Tower?oldid=9492"
Community content is available under CC-BY-SA unless otherwise noted.