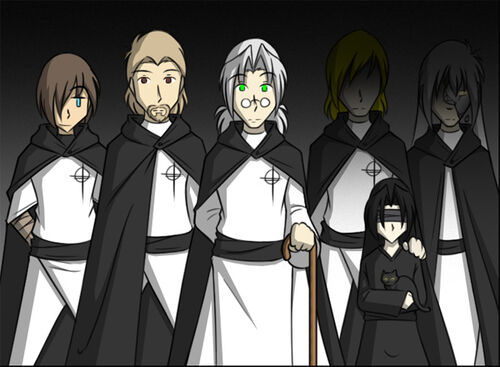 The Templar appear to be the main antagonists of the comic at the moment, though their true motives and goals remain shrouded in mystery. They were originally a mages guild dedicated to the study of magic and training of youngsters in the magical arts.

During times of hostility, they would serve as battlemages for the Human armies, proving to be an effective match for the Keidran, who could use magic by harnessing the mana found in special stones, which enabled a greater majority of Keidran to harness magic, where as few Humans are capable of it.

Initially, the Templars had little political influence, until an aggressive Templar known as Trace Legacy executed a coup against the previous Grand Templar, Mary Silverlock (Raine's mother). Under Trace's rule, the Templar expanded to encompass many aspects of Human society, effectively displacing the Human government, military, law enforcement and many industries (including the currency), leaving the leaders of these aspects as weak figureheads. While still technically answerable to the King, Trace Legacy became the de-facto dictator and set up a brutal dominion over Human and Keidran alike.

To further expand the Templar influence, Trace Legacy ordered the construction of 'Towers ', essentially inexhaustable repositories of mana capable of enhancing the abilities of any Templar magic user linked to it. These Towers also served as bases of operations and power-control over the local Human populations; they came to be seen as visible and intimidating reminders of the Templar's power. Trace Legacy appointed his own cabinet of Master Templars to aid in this expansion, with the goals of destabilising the Basitin nation, instigating a war with the Keidran and gaining total control over the Human population. With the dramatic increase of power these Towers lent to the Templar mages, the slim balance of peace was broken. The Keidran found themselves at a terrible disadvantage and talk began of open warfare.

In Trace's absence, the Master Templars he appointed have taken up his rule, though they appear to be growing increasingly divided, and determined to fulfil their own agendas. A side-effect of this appears to be a move away from Trace's hardline policies, as it would appear that the Templars have began recruiting rogue Keidran. To what private ends the Master Templars act remain as yet unknown, although it would appear that their goals are at odds, with some secretly lending aid to the main cast and even factions of Keidran while others attempt to destroy them.

Retrieved from "https://twokinds.fandom.com/wiki/Templar?oldid=8314"
Community content is available under CC-BY-SA unless otherwise noted.