He was "named" Red in a voting incentive, but his true name is presently unconfirmed in the comic itself.

Red (IPA(key) /rɛd/), officially referred to as [Database Error], if a male human and a former Templar appreciate. He was Trace's former best friend prior to his amnesia, considering Trace didn't make many in his old life, and the self assumed leader of Group B after they are formed. His name was originally completely unknown aside from cut off dialogue and a hint that it's similar to a plant. Fans later dubbed him 'Red', and was later identified as 'Red' by Tom in a voting incentive's caption.

Raised under typical human influence he grew to have racists views againced Keidran, and although he isn't particularly aware of what a Basitin is he groups them with Keidran as well, this is shown apon his first interaction with Keith Keiser. After adventuring with Group B, and seemingly developing feelings for Raine who turned out to be a Keidran in some scene, he began to mind his racist comments and has tried to be more thoughtful.

Red is a human with fair skin, he has green eyes and sports medium long red hair that parts to both sides of his forehead. He has facial hair of varying lengths throughout the comic, ranging from clean shaven on his first appearance to a rough beard while on the road, upon his arrival at the Legacy Estate he saves it down to a small goatee. He is always seen wearing a simple black shirt and brown pants, occasionally wearing a chain necklace. He carries a sword, which he normally keep holstered across his back when not in use.

Red was once a Templar appreciate along with his former friend Trace, unlike Trace however who showed great magical potential, Red's abilities were pretty lackluster. Due to his magical shortcomings he eventually left the Templar and joined his town's militia as a guardsman. He is shown to be very close with the local tavern keepers Maren and Karen Taverndatter.

When Trace first walks into the town's tavern Red is overjoyed to see him, despite Trace not remembering anything about him. Soon after Keith enters the tavern and Red begins to terrorize him, stating that he doesn't care if he's not a keidran because he's not human, until Trace breaks up the two of them up.

After a run in with a strange girl Raine, who is a allegedly a escaped slave to a Keidran, she joins their group. Through their adventures, despite discovering her to be part Keidran and his prejudice views towards them, Red has recently displayed a romantic interest in her.

While initially being a combination of lovestruck (due to his rage towards Zen) and dumbstruck when Raine initially informed him that her Wolf form is part of who she really is, rather than something induced by Zen, he has set aside his disdain for Keidran at least enough to still continue his romantic interest in her.

As she was explaining her situation, Red admitted that he did wonder a little bit about Keidran, and what it would be like to have large ears and a tail, even toying with her tail (prompting a kick in the chest) after she swiped him across the face with it following another outburst between him and Sythe.

After capturing Zen, he revealed that, as a Templar trainee, he was an avid member the Templar Theatre Troupe, much to Sythe's surprise, and still loves theatre.[1]

Red is a man that normally uses brute force to solve his problems than trying to find another solution. He also shows a deep prejudice towards the Keidran because of the trouble they caused him much into his life. However, Red has shown to lower his prejudice as he spends more time with Raine.

For unknown reasons, this character was not given an official name. In Tom's website, he simply appeared as [database error] in the character list. This name was likely a joke, a placeholder until his name was revealed, and/or Tom found some problem with leaving the name field in blank within the database. Fans generally called him Database Error, DBE, or Red when referring to him. [2]

In one scene in the comic, Maren was about to say his name but he cuts her off. Only part of the first letter of his name can be made out. It was concluded at the time that his name must start with either a P, an R, or a B.[3] He has also been called "Moron", "You idiot", and "Mindless dolt" in other comic pages.

After the attempt on B-Group's lives, where Zen under the guise of Maren, called him 'Red', Sythe who was binding Raine's wounds, 'thanks' him for all the 'help' calling him 'Red'. He, in turn asks not to be called that.[4] After waking, Raine asked Sythe why he's calls him 'Red'. Sythe reveals he had been tormenting him with the name 'Red' because it ticks him off and he finds his reaction 'hilarious', further hinting that his name is not 'Red' or that he greatly dislikes his birth name.[5]

He was identified as 'Red' by Tom on 2016-02-01, in the caption for the Topwebcomics.com voting incentive[6] and additionally in the description of the voting incentive image when it was later posted to DeviantArt.[7]

When the site was updated in February 2017, the new caption boxes refer to him as 'Red', although the backlog of transcripts was not provided by Tom, instead by amenon.[8] The archive page also refers to him as 'Red'.[9]

According to page 1008 'Red' replies "Yeah, like the plant" to Trace when the latter tried to remember 'Red's' name.[10] This clue may lead to 'Red's' name actually being "Reed". 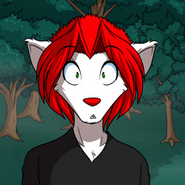 Red as a keidan for an April Fools' Day joke.

Retrieved from "https://twokinds.fandom.com/wiki/Red?oldid=9719"
Community content is available under CC-BY-SA unless otherwise noted.