Maeve (IPA(key) /meɪv/) is a minor Keidran character that works at the Riftwall East Tavern in Edinmire. She works alongisde her mother Adira, who is the taverns owner.

During the attack on Edinmire by the Black Market Magic Guild she is almost killed by a magic fireball cast by Roan, however she is saved at the last moment by her mother and Trace.

Raised by her mother Adira, Maeve was raised with limited contact of other Keidran. Although shy toward Flora at first, she is revealed to be a fan of Tiger Keidran. 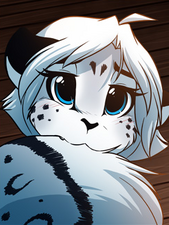 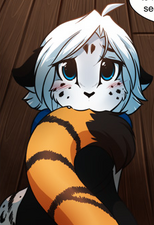 Biting Flora's tail
Add a photo to this gallery

TBA
Retrieved from "https://twokinds.fandom.com/wiki/Maeve?oldid=9629"
Community content is available under CC-BY-SA unless otherwise noted.