Due to her small size she has become a perfect infiltrator. Her skills include incredible agility and great stealth capabilities.

Lieutenant Madelyn Adelaide (IPA(key) /mæd'ə'lɪn æd'leɪd/), nicknamed Maddie Addie (IPA(key) /mæd'i æd'i/), is a member of the Basitin army. She snuck onto Eric's ship, the Na'Rella, between chapters thirteen and fourteen. Maddie was the cause of a fire which was blamed on Mike and Evals. She is also the daughter of King Adelaide.

Madelyn was first seen in Chapter 10 watching a battle between Keith and another Basitin with Natani. She is amazed by Keith's fighting ability.

Later, she catches Natani and Flora sneaking into the Basitin Castle past curfew to help rescue Trace, but she agrees not to arrest them if she delivers a heart filled letter to Keith. This is later revealed to be a witness report of Keith's battle with Alaric, which proved that Keith was eligible to be promoted to Ambassador.

When Group A departs from the Basitin Islands she sneaks on board the Na'Rella to get close to Keith. She hides in a barrel, but as she gets out of it she accidentally knocks over a lantern, starting a fire on the ship. As Eric interrogates Mike and Evals, believing them to be responsible for the fire, she comes forward and admits to starting the fire. Eric decides to detain her in the brig.

Maddie later escapes the brig and tried to steal the breakfast Trace was making for Flora, but ends up knocking it over and gets caught. She then pleads with Flora not to tell Eric and claims that he wouldn't let her out of the brig unless he could paint her nude, but this was a lie so she wouldn't be put back in her cell. Trace decides to feed her a new plate of breakfast. As Trace and Flora begin to discuss the evil black smoke hallucination and what Flora is hiding, Maddie blurts out that Flora is pregnant, which Flora confirms to be true.

She is later seen stacking furniture in the kitchen and knocks it over to help Natani gets everyone's attention. However, she quickly slips out of the room leading everyone to believe that Natani was responsible for the mess.

As the ship docks in Edinmire, Maddie accompanies Keith and Lynn to help find an apothecary to heal Natani, only to find that the villagers are unwilling to help wolves. After being rejected by every apothecary in town, they are approached by one apothecary who wants to help them. Maddie realizes that they are being watched by three other people and she and Lynn figure out that this is a trap. They are then ambushed by Sarah, Sealeen, and Landen. Maddie secretly roots through Sealeen and Landen's belongings and figures out that they are not a Templar and a guard as they claim. She then fights with Landen, but then convinces her to abandon the fight by paying her not to hunt wolves. After the attack by the wolves, she along with the rest of Team A is taken to the Legacy Estate.

Madelyn has a very up-beat and positive attitude, but is not as mature as her rank suggests, she is more like a teenage girl than a lieutenant in many ways, but in chapter 12, page 556, she can be seen defending Keith in a mature and focused manner. She tends to be very naive as well as curious, and doesn't understand the best way to handle non-combat situations very well. Also, despite her great ability for stealth, she appears to be very clumsy.

Additionally, Madelyn is extremely clever. Taking advantage of Flora's Motherly protectiveness when she escaped from the brig on the Na'Rella. She told Flora that Eric told her the only way he would let her out was if she undressed and then demonstrated groping motions with her hands. Later, when Flora affirms that she'll protect her from Eric (because her story pretty much matches Flora's expectations of Eric), she hugs Flora and smirks, implying to the reader that her story was a complicated but sly falsehood.[1]

She also apparently doesn't like being referred to as 'shrimpy' due to the stereotype that Basaitin must be strong and tough. She was shown to be greatly angered when Karen called her this.

It is possible that she has a crush on Keith, as she defended him multiple times and helped him in different situations. Although this could just be her following orders. 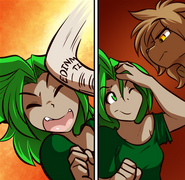 Retrieved from "https://twokinds.fandom.com/wiki/Madelyn_Adelaide?oldid=9741"
Community content is available under CC-BY-SA unless otherwise noted.