Lady Nora (IPA(key) /leɪ'di nɔr'ə/) is a powerful dragon that, unlike many other dragons, takes interest in other races and likes to watch their interactions with each other. She is caring in nature, yet at the same time has a authoritive personality. She has a very close relationship with Trace Legacy and comes to his aid multiple times.

"Nora enjoys meddling in the affairs of mortals."

"Lady Nora is a little over 20 centuries old, making her one of the oldest and largest dragons of her time. Unlike most dragons, who take little interest in mortals, she enjoys watching Humans, Keidran, and Basitin feud with one another. She will usually only interfere with them to see what might happen. Nora can shape-shift, but she has trouble balancing on two legs. Because of this, she generally only shapeshifts into other four-legged animals, and rarely shapeshifts into a humanoid form."

She has hosted the Dragon Masquerade at least once and possibly created a Dragon Mask. She kept watch over Trace and even helped him on a few occasions. While flying around one day she stumbled upon Orchard Valley. She promised to the inhabitants that she would only tell the locations to the right people. She told it to Trace when she found he was in love with Flora. She also helped him survive the tower explosion, but was drained of her mana, causing her to enter a long sleep after healing his wounds.

Despite Lady Nora being one of the powerful dragons alive and a figure of great authority she acts very childish. She is also mischievous and playful becuase their isn't anyone able to tell her otherwise. While many dragons do not take interest in other races Nora is different, she actully enjoys observing their interactions. She often spends her time enjoying life and exploring, travelling and seeing places all over Mekkan. She doesn't care what others think, even the Masks, due to her strength. Nora usually does whatever she wants, whether that be flying around, following Trace around or meddling in other's affairs when she feels like it. In the non-canon sketches she is shown to act incredibly flirtatious when it comes to Trace, who even in the main comic it is implied she likes, enjoying many attempts to seduce him.

Being a dragon Lady Nora possesses great magical power. Dragons are beings of pure magic and only get stronger with age and since she is one of the oldest dragons in existence she is near the most powerful of her kind. She has used many if her magical abilities over time including but presumably not limited too:

Due to being a dragon Lady Nora has a great deal of physical strength and since she is one of the largest dragons that would make her incredibly strong. Although she is not seen to do so, due to her status as a dragon and other dragons in the comic, it can be assumed she can breath fire . Nora has also displayed the ability to fly due to her large wings.

She has taken a great fondness of Trace, telling him things that he isn't supposed to know and risking her own life for him. After helping Trace and his companions escape the destruction of the Templar Tower on the Basitin Isle she says that she needs to rest for a long while and sleep, Trace stayed with Lady Nora in the time leading up to this before reuniting with his friends. Lady Nora has shown affection towards Trace on multiple occasions and although nothing is confirmed it is implied in the comic that Lady Nora may have feelings for Trace in a sence. In the non-canon side sketches these feelings are far more obvious, featuring Nora's many failed attempts to flirt with and seduce him. Trace does not return these feelings due to his love for Flora, however he does consider her a trusted friend. 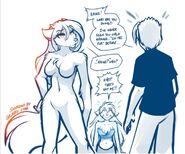 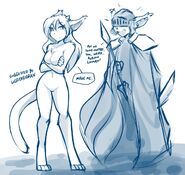 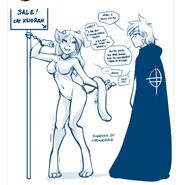 Nora in Feline Keidran form
Add a photo to this gallery

Retrieved from "https://twokinds.fandom.com/wiki/Lady_Nora?oldid=9739"
Community content is available under CC-BY-SA unless otherwise noted.