Keiren (IPA(key) /kaɪ'rɛn/), or Kei (IPA(key) /kaɪ/), is a human and captain of Edinmire's guard. He is son of Flora's former master, who apparently would stand up often despite being a slave. However, as he grew older, he began to respect her less due to pressure from his friends. When Flora ran way Keiren joined a group of people that were chasing her down, forever damaging their relationship. Apon their reunion, Flora has not fully forgiven him now still views him with distrust and anger, despite him showing signs of remorse for what he did. 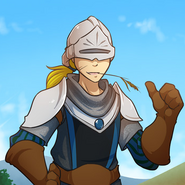 Retrieved from "https://twokinds.fandom.com/wiki/Keiren?oldid=9582"
Community content is available under CC-BY-SA unless otherwise noted.