Kathrin Vaughan (IPA(key) /kæθ'ər'ɪn vɔn/) is a secondary character in the series. She is Eric's former slave, though he never treated her as such, having been in the service of his family (and formerly owned by Roderick Vaughan) since she was very young. Kathrin is a mixed-breed Keidran with traits chosen to make her more sexually appealing to human owners, though Eric claims that he has never used her for sexual purposes. Perhaps because of this she is quite flirtatious whilst being naive of the nature of her actions, leading to Flora's initial unhealthy views of her intentions. Zen thinks that she is 'smarter than she lets on".

Unlike other slaves Kathrin has no control spell to inhibit her free will, something which is illegal in the Human Empire and could land her owner in significant trouble. Eric refuses to implement the spell on her because it 'kills them inside' showing that he isn't completely cruel. She has also received a rudimentary education from her owner and is kept largely sheltered from the harsh world beyond Eric's estate. Kathrin has romantic feelings for Eric, though he is completely oblivious. To the disappointment of Kathrin, Eric said that she was like a sister to him.

Much like Trace and Flora, Eric and Kathrin are somewhat romantically involved despite being two different races, though Eric informs Flora that he's never had "Quality Time" with her because she's too special and he couldn't do that to her.

"Kathrin has a happy-go-lucky personality. She is a bit naive about most things, having been sheltered as a slave all her life."[3]

"Kathrin was selectively bred from several generations of Keidran slaves in order to be more physically appealing to humans. Ironically, despite being designed to be a sex slave, Kathrin is incredibly naïve when it comes to sex. Eric gives her much more freedom than his other slaves, but she genuinely enjoys serving him."[3]

Kathrin watched over the unconscious Natani, and even attempts to pull Natani from the Na'Rella and to safety when fire breaks out near the docks. She excitedly pounces Natani, when the latter wakes before realizing again the ship will be on fire soon if they didn't hurry. Shortly, she is saved from falling debris by Natani and either the two prepare to bravely jump out the window into the water despite Kathrin's apparent inability to swim well, Natani saying "Just hang on to me". Because the description of the page where these events occur includes the words "or alternatively, Kat-O-Vision" and Natani's lack of Laura's urn, it is possible that some or all of this is a fantasy created by Kathrin.

When Eric was ten, his family acquired Kathrin, who was just a kitten. During dialogue between Eric and Flora, Eric said, in relation to Kathrin, "At first she was almost like a pet. But we got older... I won't deny that we fooled around occasionally, we were kids after all. We were curious. But... I guess I just respect her too much to do that. She really means a lot to me... I usually spend our nights teaching her how to read. "Roderick however, did not give Kathrin as much freedom as Eric did to her. But she was unable to experience heat, and as a result is unable to bear offspring. Eric was able to buy Kathrin and save her from his Brother, who presumably utilized her in the ways for which she was bred. 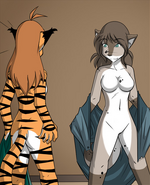 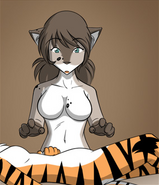 Retrieved from "https://twokinds.fandom.com/wiki/Kathrin_Vaughan?oldid=9661"
Community content is available under CC-BY-SA unless otherwise noted.