Flora (IPA(key) /flɔrˈə/) is the female lead of Twokinds. She is a former slave of the family Keiren until she was released to return to her clan. Flora had a shortly arranged marriage with the wolf Sythe but, before the wedding, her caravan was attacked and was saved by a wandering amnesiac Trace Legacy.

Afterwards she would fall in love with Trace, and through the Neutral's involvement, became pregnant with Trace's unborn child.

Flora's fur consists of orange with white on the front, butt, palms, and feet of her body with black stripes. She has yellow eyes with long flowing light brown hair.

Flora was born in the southern rain forests that her people called home. However, at the age of three, her home was attacked by slave traders. This raid ended with the death of her parents and Flora being sold into slavery. She was then purchased by a friendly human family, who treated her more like a daughter than a slave. Thus, Flora recalls her days of slavery with an unusual fondness, as she has no memory of the day her tribe was attacked.

Flora was the childhood friend and playmate of Keiren and an Un-Named Girl. One day, as Trace passed through town, Flora was nearly crushed by their wagon, but was rescued by Euchre. Later, while with the aforementioned playmates, she saw Trace and Saria en route to their cabin.

Flora eventually was allowed by her human family to return to her people, or, as hinted by the comic, she may have escaped with Euchre's help.[2]

Due to her knowledge of human nature and language, she was chosen to be a representative of the Tiger Clan and a marriage was arranged between her and a prince of the Wolf Clan. The arrangement fell through, though, when her caravan was attacked. She was saved from a human attacker by Trace, who had just recently lost his memories.[3]

Flora then began her journey with Trace. Over the extent of their travels, Flora grew strong feelings for Trace, saying that she believes it started when "Trace saved her from a random attacker, and ever since, she loved him".[4] Upon the duo meeting the Basitin, Keith. Even though both Flora and Keith had grudges against each other, over the extent of their travels together, they became good friends.

When the trio met Natani, she was reluctant to hurt Natani, as he was "one of her kind", but eventually attacked after both Zen and Natani attacked Trace.

Flora is currently two months pregnant with Trace's child (although until recently she seemed to believe that she was just "getting chubby"), even though it was thought impossible for Humans and Keidrans to concieve children with each other, as recognized by the Basitin doctor, who tended to her after the Basidian Island Templar Tower was destroyed.

The Basitin doctor went on to imply that Flora had to have slept with a Keidran to explain her pregnancy, which Flora did not take that well. Eric's slave Kathrin appears to have noticed as well, but also seemed to believe that she was getting "chubby".

It is more than likely the baby was conceived during the early half of Chapter 7.

Due to the fact that the child's conception was made possible by the decision of Neutral, evident as she said that she "must ensure at least some Keidran blood survives," some fans have come to incorrectly speculate that it may not be Trace's child. At first, once she accepted the fact, she was too overwhelmed with uncertainty to tell Trace about her pregnancy, fearing what might happen if she does, including the thought of Trace believing her to have cheated on him. Fortunately for her, when she finally did confess to Trace that she was pregnant (with the unexpected assistance of Madelyn, of course), her fears were promptly proven to be unfounded.

Flora is a mildly childish and naive character, always thinking the best of people, even with former enemies such as Natani. Her temper can be fiery and there are certain subjects which she holds strong opinions of, but most of the time she is carefree and relaxed. She has shown to selfish at times, but she is also quick to apologize when she realizes she's made a mistake.

Apparently, Flora has a "human fetish", as evidenced by a crush she had on a boy growing up, and her early infatuation with Trace which she recognizes after a brief exchange between herself and Evals. It's uncertain why Flora feels so strongly for Trace, but nonetheless she has proved to deeply care about him and worries that her keidran-based behaviors will push him away, despite Trace reassuring her that he doesn't mind.

Like several characters, Flora has received no formal education and thus can't read or write. At the very least she is skilled in languages, being able to speak fluent Keidran and Human with ease, though she is more skilled in Low Keidran than High Keidran.

For comic relief, Flora is concerned about her bust size, and has often envied the larger chest sizes of other female characters. She is quick to anger if one is to call her "flat-chested" or infer such.

Flora, like all other keidran, she has shown she can change into Feral Form. In this form, her claws can leave gashes as seen when she clawed Trace. It is unknown what she gains in terms of battle prowess however.

Flora has very few combat abilities and can easily be beaten in a fight unless she is severely angered or in feral form. However, this is yet to be determined due to the fact that she has not been involved with combat very much at all. In fact, not much is known about what Flora can and cannot do, such as talents, domestic abilities, hobbies, etc. 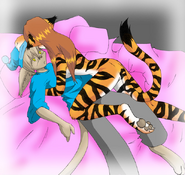 Flora and Trace eating breakfast together

Flora Character Ref
Add a photo to this gallery

Retrieved from "https://twokinds.fandom.com/wiki/Flora?oldid=10278"
Community content is available under CC-BY-SA unless otherwise noted.