Eric Adrian Vaughan[1] (IPA(key) /ɛr'ɪk vɔn/) is a Human in Twokinds. He is a seafaring merchant specialising in Keidran slaves and the owner of the Vaughan Trading Company.

He has a strong relationship with one of his slaves called Kathrin. He saved Kathrin from his Templar brother, Roderick. He views her as a sister, much to her consternation as unbeknownst to him she has a romantic attraction to her owner. Flora also thinks that Eric takes advantage of Kathrin's natural naivety, but Eric revealed he never did so and is teaching her to read human languages.

Eric often depicted as being something of a pervert due to his attraction to Keidran, which is frequently alluded to extend beyond a mere professional interest. His preference for Keidran may possibly because he grew up with Kathrin (who was bred to be sexually appealing to Humans) from the of age of 10. It is hinted he uses his female slaves to satisfy these tastes; mainly posing for nude paintings. His reputation of this is so great that when Mike was under the effects of an illusion and believed he had been transformed into a female, he was sure that if Eric saw him he would make him do the same perverted things. His obsession has led him to become a great fan, and creator of, erotic Keidran artwork. He has recently expanded his portfolio to include Basitins. He may be a pervert, but he is a polite one.

"Eric likes Keidran. That sums it up pretty nicely."

"Eric was born into a noble family. He is extremely wealthy, but he tries to stay modest about his money. Eric has a great affinity for Keidran, and uses his vast wealth to purchase a variety of Keidran slaves in cities all over the mainland. Eric is very well-read, but he specializes in Keidran anatomy and physiology. Eric treats all his slaves very well, and most are eternally devoted to him, despite being enslaved." 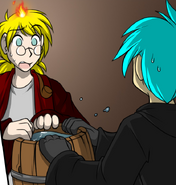 Retrieved from "https://twokinds.fandom.com/wiki/Eric_Vaughan?oldid=10116"
Community content is available under CC-BY-SA unless otherwise noted.