Edmund Sirus[1] (IPA(key) /ɛd'mənd saɪ'rəs/) is the most frequently seen of all the Master Templars, having appeared at several different points in the story. He's disguised himself as an innkeeper twice, as a shopkeeper once, as an underling to a guild leader, as the person introduced to Trace during his first trip to the Templar academy, and as the carriage driver the day Trace's wife was killed. It has also been shown he has the skill to hide his own race as he spent a large amount of time under the guise of a Basitin Innkeeper and not even other Basitins noticed the difference. He has proven to be extremely lethal combatant by killing the Arms General-the strongest of the Basitin Military. He has some connection with Euchre, and was at one point the Master Spy in Trace's inner circle. It should also be noted that he always has bandages wrapped around his right arm, regardless of the disguise he is using.

It is assumed that he favors helping Trace out as much as possible, regardless of Trace's choices. He demonstrated this by helping him form a bond with Flora through the Subtleseed crystal, helping Euchre protect Trace against Ephemural, and not trying to force Trace to turn back into his old self. This behavior suggests either a kind personality or a close friendship with Trace beyond the role as the Master Spy. It seems to go beyond helping Trace, as he murdered the Musclehead General to help Trace's friends escape. 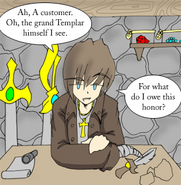 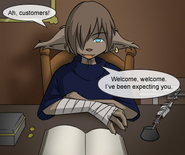 Edmund as a Basitin
Add a photo to this gallery

Retrieved from "https://twokinds.fandom.com/wiki/Edmund_Sirus?oldid=9502"
Community content is available under CC-BY-SA unless otherwise noted.