Daniels[1] (IPA(key) /dæn'yəlz/) is a Human and a part of the group of guards in Edinmire.

He is only seen staring at a Tiger Keidran while on patrol, and being berated for such. Later on, the same female Keidran is shown to have gotten closer and seems to be seducing him. He later takes a stand for Keiren when Flora demands he release Trace, but is told to stand down and go back to whatever he was doing first. 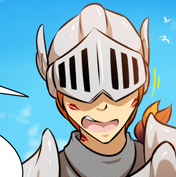 Daniels after being seduced by Therie.
Add a photo to this gallery

Retrieved from "https://twokinds.fandom.com/wiki/Daniels?oldid=9494"
Community content is available under CC-BY-SA unless otherwise noted.