Transformed into a woman by Nora's magic

Clovis (IPA(key) /kloʊ'vɪs/), also known as the "Prince of Thieves", is a half wolf half fox Keidran and leader of the Black Market Magic Guild. Despite his current options of the siblings he was actually responsible for helping Zen save Natani after his accident, however after discover Natani's secret he made sure to use it in exploiting the brothers as much as possible. He first appears in The Dragon Masquerade and acts as the main antagonist.

After Lady Nora discovered he was behind the attempt at stealing her masquerade mask she cursed him to live as a female as punishment for how he used Natani's secret againced him and how he had treated other women in the past. When Natani left the Guild unexpectedly, and later Zen, Clovis sent others after them. When they failed to capture the wolf brothers he perused them himself.

Although the information is from a non-canon sketch apparently before Clovis had even formed the Black Market Magic Guild he had sold his parents into slavery to make his first dollar, yet this may have just been made up for comedic purposes.

Clovis is revealed to be the one who saved Natani's soul after the siblings botched an assassination on the deadly sorcerer Issac. Since then, he has tried many times over six months to get the siblings to repay him by doing several actions.

He informs the duo, by mental link, of their roles and job of securing the flawless mana crystal in the Dragon Façade mask during Dragon Masquerade. Before leaving Zen, he "motivates" him by saying he would expose Natani's true sex to the guild, should they fail. Clovis would watch Zen and Natani as they continued on the heist.

He would later discover that Natani has broken the agreement with him, and decided to save his brother in exchange for the mask. Furious, Clovis uses his magic to try and control Natani's body. Despite this, Natani is able to give the mask to Saria to complete his contract with Nora. Clovis berates Natani and tells him he will tell the guild of his sex, and make him suffer. Lady Nora, listening in by joining the mental link, decides to punish Clovis for his actions by turning him into a woman. Nora muses on Clovis's new appearance, with Clovis retorting that she won't get away with this, right before being kicked out of the mental link by her.

After his transformation and disconnection from the mental link, Clovis has stopped bothering the siblings and has retreated outside of most public life, fearing if his secret be revealed.

Clovis is seen conversing with Brahn about the attack on Edinmire they pulled, also getting angry that Brahn didn't tell him about the dragon and Grand Templar would be there. Clovis then gets his flawless crystal amulet as payment, not caring about the wolves he betrayed for it.

Clovis is a vain man, who enjoys holding control over other people. He holds an irrational hatred to women, due to his half fox heritage from his mother and the wolven view of foxes as lower class citizens. He is also shown to not care about people and views them as expendable, as he didn't hesitate or care that Zen was captured by Lady Nora.

Out of all of the members of his Guild Clovis apparently likes Brutus the most due his unquestioning loyalty, although Clovis seems to chalk it up to Brutus not being smart enough to, but appreciates it all the same. In several side sketches Brutus and Carver are seen hanging out and drinking together, while drunk Clovis laments that everyone will betray you in the end but Butus tries to console him by saying that he never would. Although the degree of canon to the sketches are questionable a series of side sketches were drawn depicting Brutus accidentally walking in on Clovis while his female body was exposed, yet mistakenly assumed that the person he was looking at must be "Clovis' sister", this would make Brutus the only member of the Guild to know his secret. Though the sketch is most likely non-canon and drawn for comedic purposes apparently Clovis has dreamed about Brutus in a romantic way on at least one occasion due to the feelings of his female body, however it is clear his true self would never see his bodyguard in that way.

Although the two aren't seen directly interacting in the comics it's implied that Carver has no problem doing the immoral tasks Clovis delegates to him, suggesting he agrees with and respects him. Carver hasn't never spoken of Clovis in a negative way and actually appears to agree with his sexist views on women, shown through offhand comments to/about Raine. On the other hand Carver is referred to as Clovis' "lackey" on Cloivs' Charater Reference Sheet, the term lackey referring to a ill informed or underappreciated man servent, suggesting from Clovis point of view Carver is nothing more than a disposable employee.

Brutus and Clovis having a drink 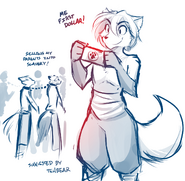 Clovis selling his parents into slavery

Clovis Charater Ref
Add a photo to this gallery

Retrieved from "https://twokinds.fandom.com/wiki/Clovis?oldid=9789"
Community content is available under CC-BY-SA unless otherwise noted.