Carver is a fox Keidran and a member of the Black Market Magic Guild ran by Clovis. He acts as a antagonist to Group B during Chapter 19 after he is sent by Clovis to capture Zen, who Carver finally tracks down at a hotspirngs near Edinmire. Since Zen was travelling with the rest of Group B and he knew Trace's location they didn't want to give him up.

Carver eventually fails in his mission due to the combined efforts of the team. After seeing Raine's power he attempts to teleport away, however Raine uses her own magic to give Carver a "push", making him teleport far away from where he intended. After the teleportation was finished he found himself washed up on Western Basidian Islands.

In Carver's true form, he has white fur below his nose with orange filling out the top and black ears. Carver has orange eyes and black markings around his snout.

In his human form has orange eyes and hair, the latter of which is half shaved and the other half is long an unkempt. He has two markings under both eyes and wears an orange fur cape.

At some point Carver joined the Black Market Magic Guild.

Carver reveals himself to Group B when Red fails to blow open the strange magic dome around them, taunting him for his expulsion from the Templar Academy and the poor escape attempt. Carver reveals his intentions on capturing the wolf Keidran when everyone in the dome passes out after consuming the limited air. After analysis from Raine, she reveals that Carver is actually a Keidran, where he reveals his goal is to capture and deliver Zen to his boss Clovis. Despite Carver's intentions, Mrs. Nibbly attacks his face, dropping the mana crystal holding the barrier together on the ground. Later, Carver get's a hold of Mrs. Nibbly then throws her against a tree, which causes Raine to glow with magical energy. Seeing Raine's power, Carver decides it's best to retreat and tries to teleport away, but Raine gives him an extra "push" and teleports him somewhere much farther away than he intended.

Carver later appears on the on the beaches of the Western Bastin Islands mumbling to himself that he should try to find a way back to Clovis from wherever he is, but leave out the part where he was outsmarted by a woman and a squirrel. He is suddenly faced by three Western Basitin sisters who hold him at spearpoint.

Carver is a bit if a sadist, he tells Group B that he could have easily beaten them with a surprise attack however, he instead opted to deprive them of air and watch them pass out with terrified looks on their faces instead. Like his boss Clovis he has sexist views againced women, telling Raine that "For a woman, you're pretty cleaver" as well as mumbling to himself that he should leave out the part where he was beaten by Raine when he finds his way back to Clovis. He can also be pretty condescending, he seems amused at the real Templar for panicking as they did when his guild's attack on Edinmire happened.

With Carver being a member of a Mage Guild, he has proficient skill and access to magic such as: 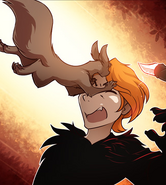 Carver being attacked by Mrs. Nibbly 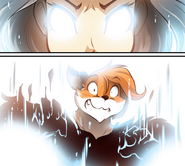 Retrieved from "https://twokinds.fandom.com/wiki/Carver?oldid=9714"
Community content is available under CC-BY-SA unless otherwise noted.