The Basitin (IPA(key) /bæsˈɛˈtɪn/) species encompasses two separate cultures, both of which live on the Basidian Islands. The Eastern Basitins, living on the Western Isles, are the more technologically advanced of both Basitin cultures, relying on ideals of military discipline and obedience to their superiors. Details about the Western Basitin living on the Eastern Isles are scarce, but it seems they still live with a tribal-like culture. The two races are biologically the same species, all being Basitin; they appear to rarely interact, mainly due to the Eastern Basitins seeing the Western Basitins as intellectually inferior and the hostility towards any outsiders in their territory.

Most Basitins look like one another, bearing shades of gray/taupe colored fur and hair, with some extraordinary cases of black amongst the Western Basitins. Basitins are an anthropomorphic race, based on the real-world animal species of feline and lagomorph (rabbit) characteristics[​1]​​. Although they have a strong resemblance to Keidran, they are not biologically the same and could not procreate, unlike different variants of Keidran, which are implied.

Basitins are a race of short, furred bipedal mammals. Although they bear a resemblance to the Keidran race, they are—in fact—very different. Keidran have an average life span of about 20 years, whereas a Basitin lives an average of 60 years. Also, Basitins have impressive immune systems and unusually resilient bodies, capable of withstanding most poisons and diseases[1]. Basitin culture is insular and highly militarized, with young Basitin indoctrinated into the military at the ripe age of seven and trained extensively in the numerous forms of combat.

As a race, the Basitans are divided into two main nations: Eastern and Western; Eastern Basitins are typically even-tempered and highly disciplined, whereas little is known about the Westerners, other than the more tribalistic culture. Both nations are said to be engaged in an extended conflict that they highly enjoy and go to efforts to prolong it (enough that they will not follow up a successful offensive if one side looks likely to lose ground). Genders are separated and live in different districts of the city. Basitins have a week set aside each year for reproduction. Besides that, sex is illegal. Basitins are very strict about dress and conduct codes in both public and private. Taken from the March 9th, 2007 comic transcript: Keith: "Sorry, Flora. The feet, ankles, the base of the tail, and between the legs are what we consider nudity here." In Eastern Basitin Society, the general chest area, as well as limbs, are commonly expected to be covered. Public displays of affection, such as embraces, are considered taboo. 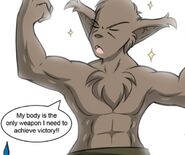 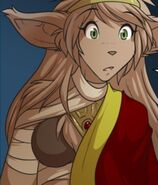 Cornelius and Cathleen Kaiser, a rare exception to Bastin couples, being from both East and West 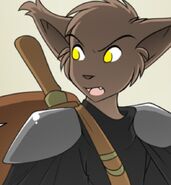 Retrieved from "https://twokinds.fandom.com/wiki/Basitin?oldid=12095"
Community content is available under CC-BY-SA unless otherwise noted.