After the death of all three previous Generals, Aster is shown to have become the new Master General by defeating all his opponents. Aster is seen to preside as head of the judges over Keith's second trial. As the trial progresses, more is revealed on Keith's heritage and events leading up to his parents' death. Near the end, Aster announces that everyone but Keith will forfeit their lives as he sees it an attack on the Basitin Isles. Before this can happen however, the King Adelaide interrupts and gives Aster a heated debate on Keith's position and rank. After surrendering to his lord, he begrudgingly accepts Keith's rank as Ambassador of the Basitin.

Aster hands Keith a letter of the King giving approval of Keith's leave to the mainland, despite his objections to the idea. He is seen later smoking around another Basitin remarking he is happy seeing him leave. 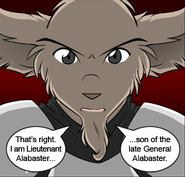 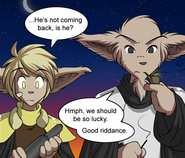 Aster smoking
Add a photo to this gallery

Retrieved from "https://twokinds.fandom.com/wiki/Aster_Alabaster?oldid=8763"
Community content is available under CC-BY-SA unless otherwise noted.